There are probably three reasons why you are planning to visit Barcelona:

If this is what you are looking for – then go to Valencia!

Seriously. It’s an amazing city. Typically Spanish. And, as yet, unspoilt by mass tourism.

2. You are a fan of Gaudí. And want to personally experience his masterpieces.

In this case, you really MUST visit Barcelona. But if you want to actually enjoy the experience, and if you want to really appreciate his finest work, then you MUST have a plan (detailed below).

3. You just want to be in Barcelona. But you want it to be an enjoyable time.

Then you really really must read the following.

Like Venice too, Barcelona has become a victim of its own popularity. There are just too many visitors.

But you can, and you should, still visit Barcelona. And actually enjoy the experience.

But you will need to have a plan. And be willing to make a few, rather trivial, sacrifices.

Your guide book will probably tell you to visit La Boqueria. In fact, Tripadvisor lists it as one of the most-popular attractions in Barcelona. A must-see.

But for “most-popular” read “most-touristy”.

After having visited the Central Market in Valencia, which I had read was “a poor-cousin of the fabulous La Boqueria in Barcelona”, and having thoroughly enjoyed my Valencian experience, La Boqueria had quite a lot of living-up-to-its-reputation to do.

And it failed miserably.  I left La Boqueria feeling SO disappointed!

And my local Couchsurfing host was appalled. Appalled that I actually went there in the first place! She takes all of her visitors to the Santa Caterina market instead (and having now visited this market too, I can see exactly why).

[And yet another blatant plug for Couchsurfing! Staying with locals means that your entire experience of a place is completely different. Because they are local people, your hosts know exactly which attractions to visit – and which to avoid!] .

First, I’ll explain exactly what you can expect at La Boqueria, and this will hopefully make you realise why a visit to the Santa Caterina market is such a good idea instead.

On the advice of friends in Valencia, I visited the market there at 08:30 (my friends told me that the atmosphere completely changed at 10:00 when busloads of visitors arrived). And they were so right.

So, I did the same in Barcelona. I visited La Boqueria at 08:30 (and 08:30 on a Monday morning too – so I couldn’t have arrived at a quieter time). The market wasn’t in full swing though, but the clientele was already predominantly selfie-stick-laden. A lot of the market traders seemed to be waiting for 10am – when they could start selling to tourists. And of those who were already up and running, a few seemed to be preoccupied with preparing their meats and fruits, chopping them up into bite-sized chunks, placing them in small plastic pots, with plastic forks/spoons included, in readiness for the onslaught.

Authentic it is not.

But if you do visit, and you do require to use their toilet facilities, you will find them at the far end of the market, by the elevator. To access the toilets you need to descend two flights of stairs. There is nothing to indicate that the toilets are accessible, but the elevator does descend to this level. So, I suppose, in an emergency, an accessible solution could be found. I would have liked to have found this out myself – but I just couldn’t get out of La Boqueria fast enough.

Santa Caterina market, on the other hand, was delightful.

Yes, there were still a few gawping visitors. But this is Barcelona. You won’t go anywhere alone.

But only about 10% of the people there were camera-snapping visitors. Everyone else was either buying the amazing fresh produce on offer, or were enjoying eating this produce, in tapas form, as they enjoyed a glass of wine/beer at one of the cafe/bars located within the market. If you prefer to eat outside in the sunshine, there is another cafe on the pedestrian square at the front of the market.

And when nature calls, toilet facilities are available – on the same level. There is also an accessible toilet – but this is only a larger toilet – and has no actual accessible features.

And killing those two birds with one stone? 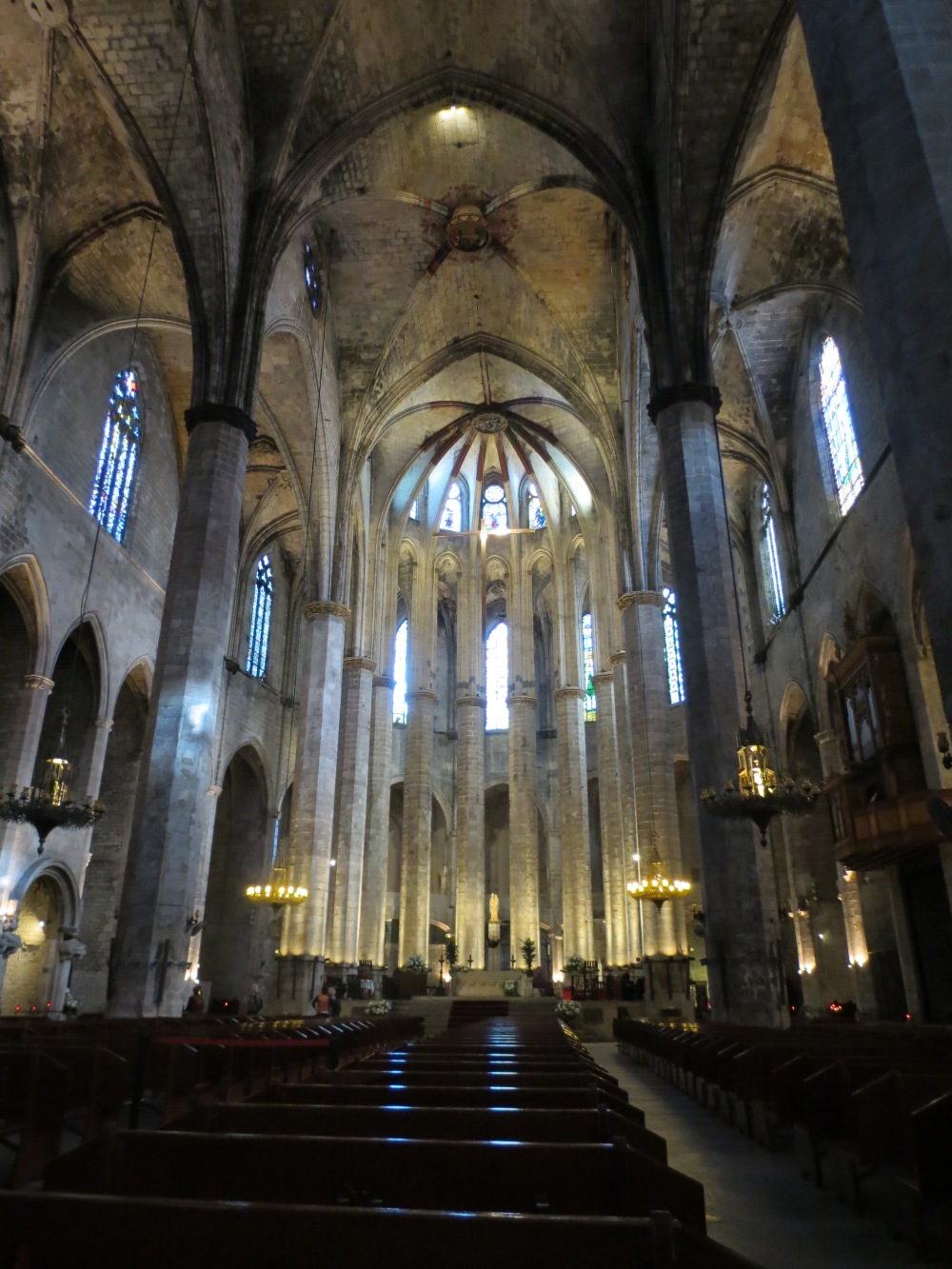 And I would recommend visiting the Basilica Santa Maria del Mar instead of the more popular Barcelona Cathedral (which is also located nearby).

Like Barcelona Cathedral, the Basilica Santa Maria del Mar has a flight of steps at the front.

And the best part?

While I was inside the, very cool, Basilica Santa Maria del Mar, enjoying the enormous church (the stained-glass windows are particularly beautiful), I was accompanied by around just 10 other visitors!

Something that I recalled later, while I was negotiating the crowds outside of Barcelona Cathedral.

And now to the main event. Gaudí. 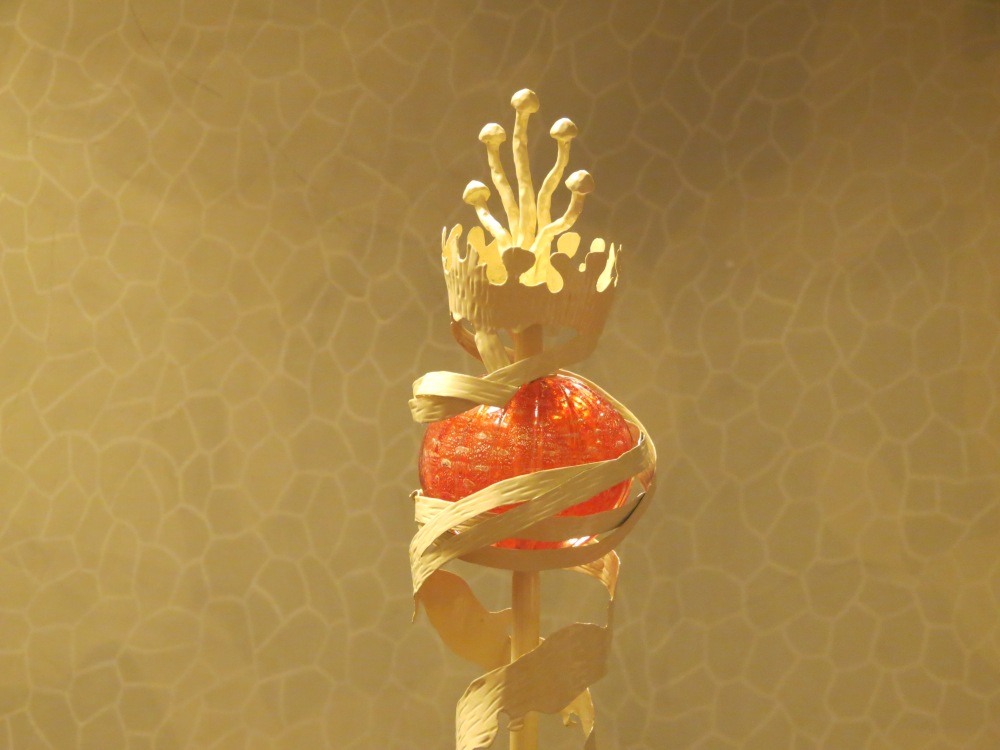 Your number one reason for wanting to visit Barcelona in the first place, is probably to see, and experience, the amazing work of “God’s Architect” – Antoni Gaudí i Cornet.

But this is Barcelona. And you won’t be alone in your appreciation. In fact, time it wrong, and you won’t even be able to properly see his architectural masterpieces. They’ll be obscured by a forest of selfie-sticks!

There is a way, though, to have the best experience possible.

But this will mean setting your alarm clock (on holiday?!); foregoing your free hotel breakfast (“But it’s included, and sets me up for the day!”); and even spending a few Euros MORE than you would normally (but trust me on this, you really do want to spend the extra few Euros!).

First, you will want to visit Casa Batlló. And to take advantage of their “Be the First” offering (all €36 of it). This allows you access to the house at 08:30, before it is opened to the general public at 09:00. This means exclusivity. And you’ll also gain access to parts of the house that are closed to the general public. And as you’ll be sharing the entire house with a maximum of just 19 other people, you won’t even know that they are there. And even if you take the full one-hour-long audio tour, you will still be 30 minutes ahead of the rest (so you’ll still have the top floor to yourself!).

But I would recommend that you take the least time possible, as it will have a bearing on your enjoyment of what comes next.

As soon as you have finished savouring the delights of Casa Batlló, and have left the building, jump in the first black/yellow taxi that you see (they are everywhere), and hightail it over to the Sagrada Familia (it is not too far). Gaudí’s unfinished architectural symphony opens to the public at 9am – so you’ll want to arrive as close to 9am as possible.

After spending some time in the Sagrada Familia, the obvious next place to visit is Park Güell. However, I have already visited the park on numerous occasions, and now that they have decided to start charging for admission to the park (remember what I said about Barcelona becoming a victim of its own popularity?), I won’t be going back. But you might want to. Especially if this is likely to be your only visit to Barcelona.

After the Sagrada Familia (or Park Güell, if you have opted for that too), the rest of your day in Barcelona is yours to enjoy. And as you got up so early, you might want to return to your hotel for a wee nap. In fact, I’m a big fan of having “lunch in bed” – so grab a picnic, maybe some fruit, a nice bottle of wine, and enjoy! (“Breakfast in bed”, especially on holiday, does feel a bit decadent; having “lunch in bed” though? Well that’s just naughty. But oh so much fun! You ARE on holiday after all).

One place I would seriously avoid though? La Rambla!

It’s just a pedestrianised tourist trap. Where Eastern Europeans play “traditional” Flamenco music on their guitars; and where your tapas is more likely to be served by a Chinese waiter (your meal having been prepared in a kitchen staffed exclusively by Chinese cooks. I have nothing against Chinese cooking, in fact, I actually really enjoy it. But if I want to enjoy Chinese cooking, I’ll go to a Chinese restaurant, and eat Chinese food).

There is nothing remotely “authentic” about La Rambla.

The best source for hotels in Barcelona is either Trivago or Booking.com.

If you require accessible accommodation, both have options for selecting only accessible hotels.

This guide, although predominately aimed at visitors who require to know about the accessibility of these attractions, is aimed at making a visit to Barcelona as enjoyable as possible. For everyone.

Disclaimer: My visit, and this report, was only made possible thanks to the kind support of Casa Batllo and the Sagrada Familia. And although access was donated, my opinions, as always, are my own.