What I wrote before coming out here:

“Well, if it’s good enough for the ravenous wee Scottish buggers, then it should be more than a match for anything that I encounter in rural France!

And as Mary Jean products are “natural”, I will be even happier (I just hope that there is no sunscreen property included – as my milky-white legs could do with a good tan!).

This should be a good test of the product. After a long winter, the French biting insects will be extra-hungry. And as the Canal du Midi passes through some extremely rural regions (part of the attraction), and as the water in the canal will be a magnet for every insect in southwest France, I shouldn’t have to wait long for my first encounter.

So Mary Jane “Highland Midge Lotion” – do your best!”

So how is it going now?

Well, I’m now using it daily – so it must be working.

I’ll be straight up here. I had my doubts. You see, I tried a “natural” mosquito-repellent in South East Asia years ago (it also contained citronella). But it failed miserably – and my mosquito-bitten body was in a Thai shop the very next day, buying something packed full of nasty chemicals that killed mossies on contact.

So, even although I am trying to be openminded about this test, I’m starting from a point of scepticism.

So, to the Highland Midge Lotion test:

As the bottle measures exactly 100ml, it can be carried through airport in your wee see-through plastic bag (which can contain a maximum of 1 litre of liquids). So I could bring it to France in my carry-on luggage. Tick.

The bottle has a tight-fitting clear plastic cap, which then covers a self-propelled “pump action” dispenser. So the bottle remains firmly closed at all times in my rather tightly-packed bag. So it is clean to carry. Tick.

A self-propelled pump? There are no CFCs in this baby. Big tick.

Using the product is straightforward. And as the pump keeps the bottle clean, and you can replace the cap of the bottle while you have a dollop of the lotion on the palm of your hand, there’s no mess. Tick.

Now the actual product. Does it work?

Mary Jean’s Highland Midge Lotion claims to have two properties. First, its efficacy as an insect repellent. And also as a soothing “after bite” lotion.

And as is usual in my topsy-turvy world, I used these two properties in the reverse order! I hadn’t started using the lotion as an insect repellent yet, but there was a huge rainstorm on the first day of my walk, and I sheltered for part of the storm under a bridge – with half the insect population of southwest France it seemed. And as I was wearing a kilt, the insects got a taste for my bare legs – especially the back of my knees for some reason.

I didn’t really notice though, until I started walking the FOLLOWING day. The hem of my kilt was continually brushing against the sores that had formed where I had been bitten on the previous day – and it was, putting this politely, rather annoying. So I decided to try out the soothing properties of the lotion there and then. The relief was immediate! So:

Immediate relief. And knowing that the other ingredients were actually good for my skin in general, and being a non-metrosexual guy who doesn’t normally use beauty creams, it gave me a good excuse to smear on some cream. So huge tick.

I had walked all day, so as it started to get darker I was rather tired and sweaty. And as I was staying with another stranger that night, I decided to sit and cool down a bit first.

And that’s when the mossies attacked!

So out came the lotion. And the order in which I applied the lotion demonstrated the fact that French mosquitoes hate it as much as those wee voracious beasties we get in Scotland.

First, I applied the lotion to my legs (I still remembered how annoying it was to walk the following day if I had fresh bites on the back of my legs).

That’s when I noticed that all of the wee biting feckers had moved up to my arms.

So I covered my arms in lotion next.

And all of a sudden they were in my eyes, and buzzing around my ears. They clearly no longer fancied nibbling at my arms and legs, and had decided that my face would have to do instead!

So my face was last. After I had finished covering my face with the lotion, I actually used the remnants of the lotion on my hands as “hair gel” – wiping my hands clean on my hair – probably not what it was designed for, but at least I wouldn’t look as unkempt when I turned up at my new friend’s door.

As I sat there cooling down, I could still hear the buzz of approaching insects. But once they got within a few inches of my ears, they decided to look elsewhere for dinner!

So a big tick here too.

Overall, I actually really love this product, and it gets a huge recommendation.

I’ll be walking along the Canal du Midi for another week or so. And once the bottle is empty, I’ll be straight online to order another bottle from Mary Jean 🙂

Available to buy online at: http://www.maryjean.co.uk/products/highland-midge-lotion/ 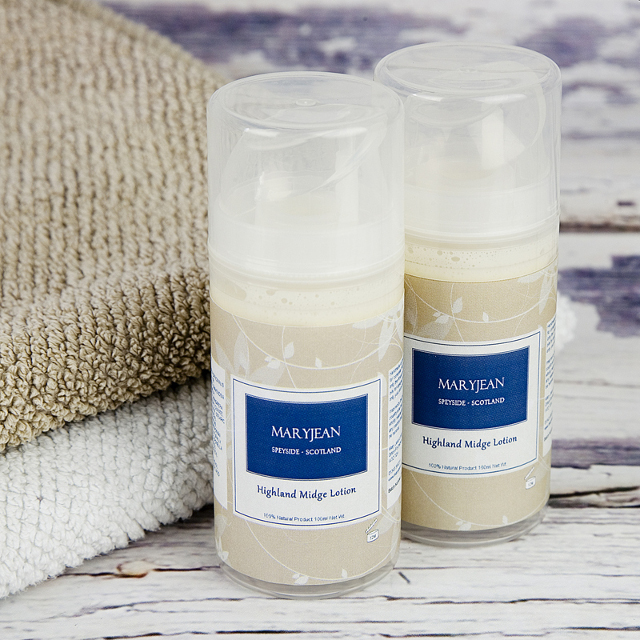